This visualizer decodes USB Request Block (URB) packets. It also displays all PnP packets. All monitored URBs can be displayed in one of two schemes - Basic or Complete. In Basic scheme, only general information about a packet is displayed, while in Complete scheme full packet information, including the binary data attached to the packet is displayed. 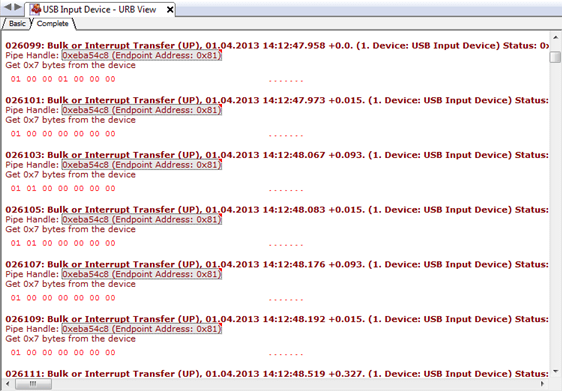 For each captured packet the following information is displayed:

Packet number
This is a consecutive packet number. This number is session-wide and will be the same in each session's visualizer.
Packet type
Packet type such as “Bulk or Interrupt Transfer” or “Control Transfer”.
(Direction)
Can be either DOWN or UP. DOWN means that the packet is captured on its way down, that is, from controlling application through device's driver to USB host controller and finally, to device. UP means the opposite direction. Each packet is always captured twice: first on its way down and then on its way up. Default filtering settings may eventually hide one of these captures.
Packet capture time
Packet capture time in current user's full date/time format.