There are several ways a file may be opened by the Hex Editor Neo.

Use the File » Open » Open File… command to open the standard File Open dialog. Select a file or multiple files and click the Open button. The “Open as read-only” flag may be used to have the editor open file(s) in read-only mode, preventing the modification of original file(s).

Files you select may be located either on the local computer, or on the remote computer. Make sure your connection to the remote host is fast enough before opening the remote file in the editor. Usually, 10 Mbit connection will be enough for most editing tasks.

If a “Sharing Violation” error is received, which means other process(es) have the file opened and do not allow Read access, Hex Editor Neo asks if you still want to open a file using volume snapshot. This allows you to access file data even if another process has the file locked. Note that operating system may cache file data in memory. In this case those data may not be available in the snapshot. A snapshot is automatically discarded as soon as file is closed. Support for opening locked files is available starting from version 6.12.

Using the Right-click Menu in the Windows Explorer 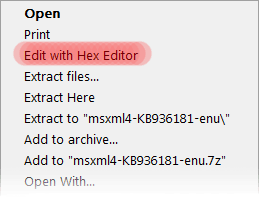 This will launch the Hex Editor Neo (if it is not already running) and instruct it to open all the files you selected in the folder.

Note: Windows Explorer references the extension DLL that is used to implement the right-click menu command. If you try to uninstall the product right after using the command, it will fail to delete all installed files and will have to schedule a reboot to finish installation.

You may select a file or a number of files in Windows Explorer (or any other compatible application) and drag them to the running instance of the Hex Editor Neo. This will instruct the editor to open all dragged files.

Launching the Hex Editor Neo with a list of files in its command line instructs the editor to open all of them.

Remember that all file names that contain spaces must be enclosed in the double quotation marks. There is a limit enforced by the operating system to the maximum length of the command line. Generally, it should be less than 256 characters.

Running this command will load the Hex Editor Neo and open all specified files.